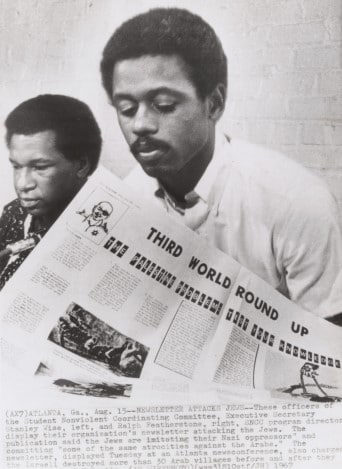 Between 1964 and 1966, SNCC underwent continuous internal debate about the organization’s principles and goals. During this period, SNCC dealt with several burning issues that would ultimately chart a new direction for the organization and enable it to define itself on its own terms, including:

The ultimate question that superseded all others was whether our work in the local communities was addressing community members’ self-defined needs and making a real difference in their lives. Certainly the direct action campaigns had helped loosen the grip of white supremacy in the rural South. Nonviolent tactics had provided protective cover, to some extent, for participants in the demonstrations. But racism was still alive and well throughout the country and especially in the Deep South. The unholy alliance of the KKK and the police still murdered scores of Black people with impunity. Thus, these discussions were intense during 1965 and would not be completely settled until a year later.

B. SNCC Develops an International Perspective, 1964

In 1964, just after the MFDP Challenge, 10 SNCC staff members were invited to travel abroad by artist/activist Harry Belafonte. They traveled to Africa and Europe and met with their sisters and brothers who were engaged in the struggle for independence from colonial domination. Their first meeting was with President Ahmed Sékou Touré of Guinea. It was an emotional journey for the SNCC workers. Fannie Lou Hamer broke down in tears at the realization that she had so many relatives in Africa that she would never meet. After they returned, SNCC organizers intensified their study of social and political theory written by leaders of liberation movements in Africa, the Caribbean, Europe, and Latin America.

Gradually, SNCC broadened its perspective, became more politically informed, and recognized the parallels between the struggles of oppressed people in other countries and the Civil Rights Movement in the United States. They also gained a deeper understanding of the role America played in aiding and abetting colonialism and the oppression of people in the “Third World.”

No longer did they want to become “Americanized”—accepted by the system that exploited them and people of color around the world. They realized their mandate was to change the American system of racism and exploitation from within. With this new understanding, SNCC no longer defined itself as a civil rights organization. Instead, it identified itself as a human rights organization. To solidify its commitment to the international, Third World struggle, SNCC opened a permanent International Affairs Office headed by James Forman in 1967.

C. SNCC Becomes the First Civil Rights Organization to Oppose the War in Vietnam and the Military Draft, 1966

In January 1966, following the cold-blooded murder of SNCC organizer and Navy veteran Sammy Younge, Jr., in Tuskegee, Ala., SNCC made some internal decisions and became the first civil rights organization to issue a statement against the war in Vietnam. While the statement condemned the United States’ aggression in Vietnam, it also spelled out SNCC’s new direction, defined the new thrust of its organizing efforts, and took a clear position opposing the U.S. military draft system, which disproportionately targeted Black men. It encouraged men to refuse the military draft and seek alternative work in the Movement rather than fight in Vietnam. Finally, the statement put SNCC clearly in alignment with the struggles of other oppressed people around the world and defined its work in the Black community as a struggle for liberation and self-determination. The statement read:

“We believe the United States government has been deceptive in its claims of concern for the freedom of the Vietnamese people, just as the government has been deceptive in claiming concern for the freedom of colored people in other countries as the Dominican Republic, the Congo, South Africa, Rhodesia, and in the United States itself.”[6] 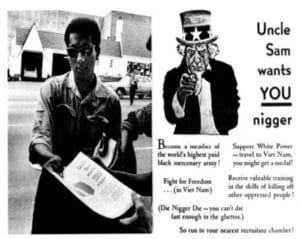 [[6] View the full statement on Vietnam at https://www.crmvet.org/docs/snccviet.htm.[references]]