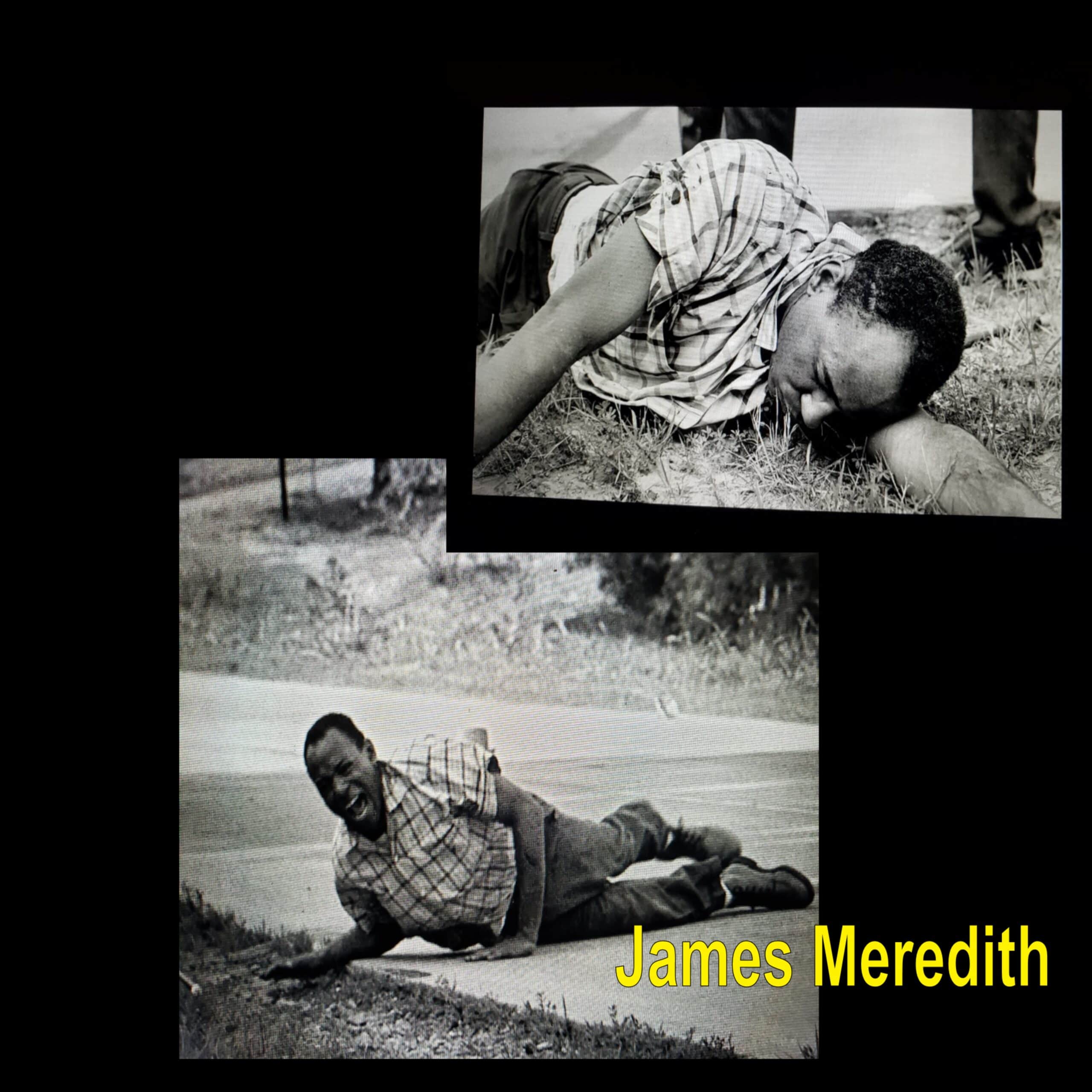 James Meredith shot at the beginning of the March Against Fear

A. The Meredith March Against Fear and the First Call for Black Power June 16, 1966

Almost immediately after the Meredith march began, violence against Blacks erupted. This time, James Meredith was seriously injured and unable to continue the march. His shooting sparked a large public outcry and drew national media attention. Hundreds joined the march, and the Big 6 civil rights organizations moved in to manage it.

As expected, political differences between the Big 6 led to an impasse and eventually SNCC, CORE, and SCLC—all of which had advocated continuing the focus on voter registration—took over. The march was reinvigorated when Floyd McKissick from CORE, Martin King from SCLC, and Stokely Carmichael from SNCC became the new leadership.

Things went smoothly until the march reached Greenwood, Miss., which had been one of Carmichael’s project cities in the early ‘60s. The police decided to arrest him for no real reason. Carmichael spent the night in jail. The next evening, he was bailed out and joined the marchers at the park.

Carmichael was all charged up, and when asked to address the crowd of marchers, he made the historic call, “We Want Black Power!” to the enthusiastic marchers, who chanted over and over, “Black Power!” Thus, on June 16, 1966, the Black Power era began throughout the world.[9] 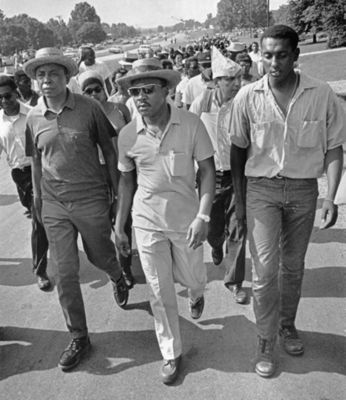 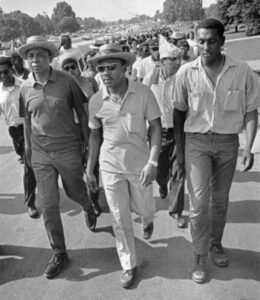 “‘Hey Jim, I got an idea. I want to know what you think of it.’ … It was Willie Ricks, the young SNCC field secretary who had acquired a reputation as a brilliant organizer….

‘Would you back me up?’…. I told him, ‘Why not? After all, you’d only be shortening the phrase we are always using—power for poor Black people. Black Power is shorter and means the same thing. Go on and try it.’”[9]

B. SNCC and Carmichael Build the Black Power Movement

Once the Meredith march ended, the business of building a Black Power Movement began in earnest. While SNCC knew that Ricks and Carmichael would be declaring “Black Power” at the march, they didn’t know how quickly and enthusiastically the phrase would spread within the Black community. Nor did they anticipate the huge white backlash fueled by mainstream media that would alienate SNCC, Carmichael, and the Black Power Movement from much of white America.

Although the term itself was new for SNCC, the concept and language used to describe Black Power were based on the terminology from the Lowndes County project playbook. Phrases like “power for Black people” and “self-determination” were part of the LCFO lexicon.

In that first month after the call for Black Power, massive amounts of mail—both positive and negative—poured into SNCC’s Atlanta headquarters. Carmichael and SNCC received dozens of speaking invitations from universities, national nonprofits, churches, and community groups around the country. 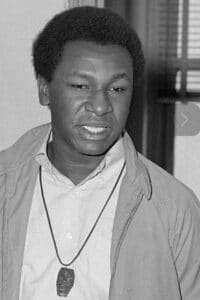 But help was on the way. Many Black people were so inspired by Black Power that they answered SNCC’s call for volunteers, and a new team came to work at subsistence wages. The new staff enabled SNCC to reorganize its communications function under the leadership of Ethel Minor, working with staffers Beni Ivey and Dezi Woods who had been newly recruited from California. Karen Edmonds (Spellman) came from Washington, D.C., to head the research office with assistance from workers Tex Simmons, Robert Moore, and Al Pertilla.

Freddie Green, William Porter, Faye Bellamy, and Joyce Brown supported the administrative functions. The SNCC executive committee, under the leadership of the new executive secretary Ruby Doris Robinson and her executive committee—Cleve Sellers, Stanley Wise, and Ralph Featherstone—met the challenges of increased demand and reorganization. The Black Power program had come alive. The new SNCC staff was so tight-knit that the FBI was never able to infiltrate them, although they tried.

When the news broke about Black Power, three distinct audiences received the news with decidedly different interpretations: mainstream media, the Black community, and the federal government.

When the news broke about Black Power, three distinct audiences received the news with decidedly different interpretations: mainstream media, the Black community, and the federal government.

The call for Black Power spread like wildfire throughout the nation thanks to the national media that had been covering the Meredith march extensively once he got shot. When they saw the crowds of Black people chanting “Black Power” and raising their fists in defiance of racism, white reporters were stunned and frightened. Their knee-jerk reaction to Black Power was to condemn SNCC and Black Power as too radical. James Forman described the press reaction in this manner:

“Not surprisingly, accusations of ‘extremism’ and ‘racism in reverse’ filled the air. Those accusations reflected the fact that the slogan ‘Black Power’ was frightening to white Americans in general and the U.S. government in particular….

“The press attacks on SNCC became ferocious in this period, as reporters and columnists tried to make our spokesmen—particularly Carmichael—into monsters thirsting for the blood of whites…. By projecting Black Power as nothing more than “reverse racism,” the press sought to divide Black America, scare it away from supporting Black Power.”[10] 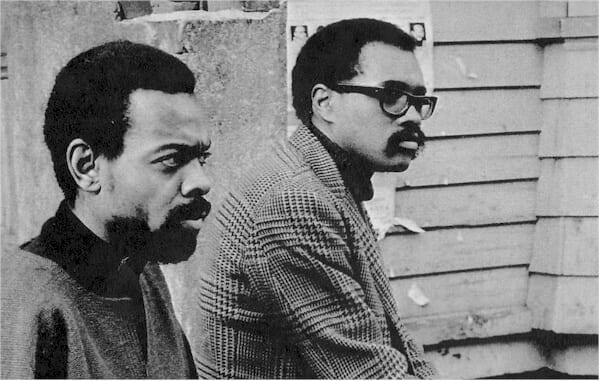 The majority of Black people, especially the younger generation, understood the concept of Black Power immediately, particularly in the Northern ghettos and on Black college campuses. Conversations about Black Power could be heard on the streets, in pool halls, barbershops, beauty salons, bars, restaurants, churches, on Black radio, and in the Black press. Black Power became the political expression of the Black Consciousness Movement. Throughout the Black community, Black Power became synonymous with Black pride, Black beauty, Black cultural awareness, Black political awareness, and Black self-determination.

The Black cultural community set about providing their own interpretation of Black Power. This was particularly true of the Black Arts Movement, which formed in response to Black Power. One of its founders, poet Larry Neal, wrote:

“This Movement is the aesthetic and spiritual sister of the Black Power concept. As such, it envisions an art that speaks directly to the needs and aspirations of Black America. In order to perform this task, the Black Arts Movement proposes a radical reordering of the western cultural aesthetic. It proposes a separate symbolism, mythology critique, and iconology…. A main tenet of Black Power is the necessity for Black people to define the world in their own terms.”[11]

The third group to respond to the call for Black Power was the federal government in the persons of FBI Director J. Edgar Hoover and Vice-President Hubert Humphrey. The latter carried out the “public castigation of Black Power,” denouncing it most severely in front of Black audiences. The FBI went underground and used its counter-intelligence operation (COINTELPRO) to target and eliminate SNCC and other Black cultural and political organizations and their leadership.

COINTELPRO began shriveling SNCC in 1964 in the wake of the MFDP Challenge to the Democratic Party and continued during SNCC’s 1965 Anti-War, Anti-Draft campaign. With the emergence of Black Power and the fear of a “Black Messiah” that would rise up and overthrow the government, FBI agents intensified their tactics of surveillance, infiltration, media disinformation, false arrests, and imprisonment with trumped-up charges of insurrection, treason, etc.

Many SNCC people were unable to use their personal telephone lines because of the constant clicking noises caused by the tape recorders of the FBI wiretaps. Later, the House Un-American Activities Committee (HUAC) intensified government denunciation of SNCC by conducting hearings on SNCC’s “subversive” activities and later publishing a thick report on SNCC, complete with photos of the Atlanta SNCC staff.