The New Thing Art and Architectural Center (1966- ) By Topper Carew 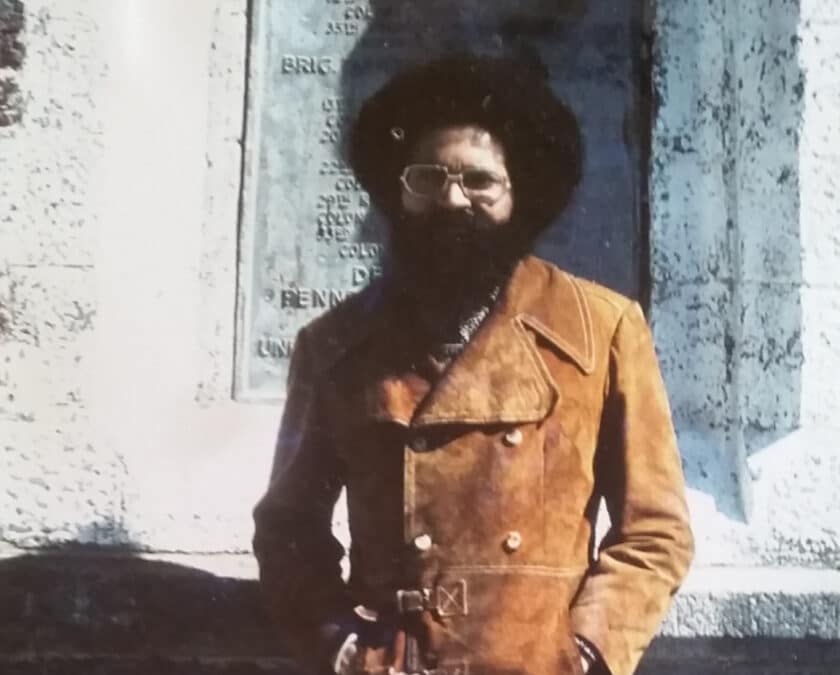 I started The New Thing in the fall of 1966 in Adams Morgan in an old, one-room storefront with a sagging floor at 1811 Florida Avenue, N.W.

It was my senior year at the Howard University Architectural School. I had withdrawn because I didn’t think that the senior class project at Howard, a Black university, should be a house for the Vice President of the United States. I felt that Black students should be thinking about more socially important projects. The Institute for Policy Studies heard me by way of Betty Garman. They invited me in as an Associate Fellow and gave me time to think about my next steps.

Due to having been in SNCC, particularly in Mississippi during the summer of 1964, I saw architecture differently. It could be a people’s empowerment tool. Up until then, it had been just an obligatory college major. In 1965, to make extra money, I took a job with Brown and Wright Architects. They asked me if I would work on the design of a public housing renovation in Southeast. I offered to work on its design IF I could work directly with the residents to see what they wanted their future homes to be like. The firm agreed.

When I got involved with the Southeast project, I was still a junior student at the beginning of my fourth year in Howard’s five-year degree program. Little did I know that I was pioneering a trend: Advocacy Architecture. I got to channel the “voices of the people served” into architectural and urban designs. I got to employ my new “power to the people” empowerment beliefs. Wolf Von Eckhardt, the Washington Post architectural critic, wrote about my Southeast work.

It was the way in which The New Thing ultimately practiced architecture and influenced others to do the same. By that time, I had developed a Black consciousness, while my Howard colleagues hated being thought of as Black. They preferred to be Negroes. They thought advocacy was foreign to “classical” architecture, but they bought into it later as an emerging trend and adopted it as a mode of practice after I had left Howard and Howard “blackened.”

Meanwhile, neighborhood kids were curious about The New Thing storefront on Florida Avenue. Who was I, and what was I up to? They had never seen a big Afro and a big beard on a 23 year-old, much less overalls and a dashiki. They were always peeking in, so I converted the architectural studio space by morning and early afternoon into after-school art space, invited kids ages 8-11, and got Lloyd McNeill to teach art.

In the spring of 1967, The New Thing moved to an old laundromat on 18th Street, N.W., at the foot of Wyoming Avenue. We had secured a contract through the Adams Morgan Neighborhood Organization to run a summer program for youth funded by the D.C. Recreation Department. I think the neighborhood organization saw this as an opportunity to promote Black consciousness. The local parents weren’t having it. They said, “We don’t want any of that black shit. We want pool, picnics, and ping-pong for our youth.”

Well, just as the summer program was starting, two kids got shot to death in a white-owned variety store one block from The New Thing. Suddenly, The New Thing became the home base for the emergency community meetings and damage control. I became the mediator and focal point. I remember the meetings with the community, the Justice Department and the police chief. The police snipers on the roofs. The helicopters. I took a long view and gave into the ping pong, pool, and picnics while also keeping the architecture and art alive. I did it in the name of peace.

After my summer contract with the rec was up, I made a decision to keep the youth program running. It would be an Art plus Black is Beautiful program. I secured a couple of small grants and recruited Melvin Deal and African Heritage to teach African drumming and African dance. Betty Garman taught creative writing. Lloyd McNeill continued to teach art, and he started a weekly series of live music concerts at St. Margaret’s Church. We called it The New Thing Jazz Workshop and printed 500 original art posters every week as giveaway announcements. They have since become collector’s items.

One of our strategic advantages was the recruitment of Conscientious Objectors. CO’s were young people who didn’t want to serve in Viet Nam for a variety of reasons. They could work at The New Thing instead. It was an opportunity to get affordable, skillful artisans as master teachers. With them, we added two townhouses, an old ballroom, and an old church as studio spaces. Programmatically, we added photography, more architecture, printmaking, graphic design, and theater.

Our pedagogy was to have master teachers train apprentices who, in turn, taught local students. As an organization, we sought out real work contracts in graphics, art direction, and film, photography, and we booked dance performances for African Heritage. Eric Jones was our co-director, Peter Parham was our youth director, and Betty Garman was our co-founder and chief administrator. They were the spine.

Filmmaking was initially a drug diversion program that we introduced for teens, but it became significant as a way for us to effectively tell our story to funding sources and to effectively compete for contracts. For example, This Is the Home of Mrs. Levant Graham was a component of an urban design contract helmed by Tunney Lee. He was based at The New Thing and had been tasked to create the concept for the Shaw Urban Renewal Area. Claudia Weill and Elliot Noyes produced the film as part of the presentation. Unexpectedly, The New Thing films won numerous film festivals and awards, and I went on to become a professional filmmaker.

Other architectural projects included assembling the team that designed Resurrection City on the National Mall for Dr. Martin Luther King’s Poor People’s Campaign. Another project confronted D.C. government officials when they decided to take homes owned by 48 Black families instead of a used car lot—our Master Plan accompanied by a film prevailed. We represented the locally elected, “community-controlled” Morgan School Board as their Advocacy Architects in their successful campaign for a new school facility, which is now the Bishop Marie Reed School on 18th Street, N.W.

The weekly New Thing Jazz Workshop was on Tuesday nights for a $1.00 admission at St. Margaret’s Church on Connecticut Ave. It promoted Black musical culture in an alcohol-free environment and allowed musical artists the opportunity to present their new music in an appreciative concert setting. Performers included Roberta Flack, Shirley Horn, Donald Byrd, The Blackbyrds, Mother Scott, J.B. Hutto, Andrew White, Buddy Guy and Junior Wells, Chuck Brown and the Soul Searchers, Elizabeth Cotton, Marshal Hawkins, and Lloyd McNeill, who co-founded the Jazz Workshop and was its original curator. Mr. Rhythm, who used to perform tap dance with the Duke Ellington Orchestra, was the doorman. The New Thing Jazz Workshop carried on for 250 concerts. We also produced the Washington Blues Festival, which featured such headliners as Muddy Waters, B.B. King, Howlin’ Wolf, Buddy Guy and Junior Wells, Elizabeth Cotton, J.B. Hutto, Furry Lewis, and many others. For many years, we produced the Root Music Show every Sunday afternoon on WAMU radio. Thanks to Rusty Hassan, it carried on after The New Thing ceased operations.

I never abandoned my justice, equity, and underdog goals. They included a public criticism of the D.C. Arts Commission—for which I was counter-attacked in the Congress—but I ultimately prevailed, and they relented and diversified. They also included confronting the newly founded—and then, very white—National Endowment of the Arts. They, too, conceded and established the Expansion Arts Division. Arthur Waskow and I organized a campaign for the Peace and Freedom party and were elected as the Adams Morgan delegates on the Bobby Kennedy for President ticket to the National Democratic Convention. After he was assassinated, we still went and persuaded the D.C. delegation to nominate a Black man, Channing Phillips, for president.

The New Thing put up a mural at 18th and Florida. It featured waterproof photos of neighborhood children at the higher level and images painted by neighborhood children at the lower level. One day, the D.C. Police Chief showed up and ordered us to take it down, He contended that it was unauthorized advertising. Well, we had permission from the owner to put up an art piece on the wall of his building. I continued to insist that it was art. The Chief issued a D.C. Court warrant to determine if it was advertising or art. If I didn’t take it down immediately and the Court ruled that it was advertising, I would have to spend 30 days in jail. And, if I lost, all of the art murals in D.C. would have to come down. I called in a number of museum curators who testified that the New Thing’s mural was art. The Judge ruled that it was art. The mural stayed up.

My dear friend Arthur Waskow asked me to appear with him in the first Freedom Seder. The service’s liturgy presented the similarities between the Jewish struggle and the Black struggle for freedom. It is still carried on in progressive Jewish communities across the country.

Adams Morgan was a very mixed class and race neighborhood. It housed 70 organizations. On a dare, I offered to unify them. In a series of potlucks at the Potter’s House, I eventually organized them into a neighborhood government. I named it the AMO, the Adams Morgan Organization. Marie Nahikian joined the effort. So did Milton Kotler. Two things grew out of it: the National Association of Neighborhoods and the D.C. Ward Council structure.

The New Thing changed the cultural landscape of Washington, D.C. We also saved a generation of D.C. youth from the emerging drug epidemic. I had never intended for The New Thing to be an organization that lasted forever, but two people helped hasten its demise. They were both liberals: one black and one white. Both were connected to the foundations. One made a surprise morning visit to one of our art buildings, not our offices, which were open all day. The art buildings didn’t gear up until the afternoon. He reported that The New Thing had shut down. The other person reported, without ever talking to us, that we had accepted a grant to make an anti-drug film, spent the money, and never made the film. In actuality, we had elected to spend the small grant on an animated film. It takes a long time to make an “animated film.” Years. Not only did we make the film, but it won all of the major animation awards in the world, except the Oscar. We would have won that, too, but we didn’t know that we needed an Oscar campaign.

Due to these rumors, The New Thing’s foundation money ran out. The Conscientious Objectors’ alternative-service stints were up, too. I was tired and angry, and my grandmother who had raised me in my hometown, Boston, was getting old. So convinced that the folks who were a part of The New Thing federation could and would survive, I wisely went home to Boston to spend time with my family and grandmother.

Topper Carew is a noted architect and award-winning film and television producer of many Hollywood hits including the TV series Martin and the movie D.C. Cab. A SNCC veteran and graduate of Howard University School of Architecture, he was recently named principal investigator of the MIT Media Lab and a faculty fellow at the Spelman College Innovation Lab.