The Founding of Sweet Honey in the Rock* By Dr. Bernice Johnson Reagon

Shortly after arriving in D.C. and finding a place to stay, getting the children in school, and getting started with my classes, I got in touch with Vantile Whitfield, whom I had met in Atlanta and who was director of Expansion Arts at the National Endowment for the Arts. Also known as Motojicho, Vantile was the artistic director of a new theater being organized by Robert Hooks. He asked me if I would become the vocal director of the D.C. Black Repertory Company. I replied that I was not in a position to create something myself, but if he was clear about what he needed, I would try to deliver. He said that he wanted the voices trained as singers for any kinds of sounds they might have to produce onstage.

In my vocal workshop, I was the first student. I actually learned what I knew about singing and voice by teaching others who had in some cases never tried to sing some of the sounds and harmonies. It was a powerful stretching period for me, and I worked with some of the most talented people on the face of the earth: Rosie Lee Hooks, Carol Lynn Maillard, Louise Robinson, Smokey, Moon, LeTari, Mike Hodge, Carol Ann North, Charlie Brown, Carlton Poles, Lynnjicho, Lyn Dyson, Chester. They were all pioneering members of a wonderful experiment in Black theater.

I grew up a bit working with them and their vocal instruments, and forming the creative team for the theater with Motojicho, Mike Malone, and Louis Johnson in dance, and Kenneth Daugherty in dance and theater arts. I taught, created, or programmed the music for many of the shows developed at the Rep. I created two original musical pieces, “Upon This Rock” and “A Day, A Life, A People,” a work I called a songtalk. Then, in 1973, after pushing from two of the strongest singers and actors in the theater, Louise Robinson and LeTari, I called the first rehearsal for the group that was to become Sweet Honey in the Rock. 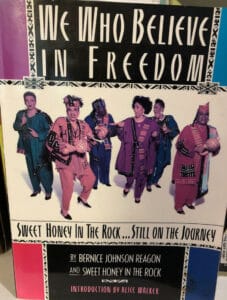 Bernice Johnson Reagon is a SNCC veteran, song leader, composer, scholar, and Professor Emeritus of History at American University. She is founding director of that National Museum of American History’s Program in African American Culture. She is an original member of the SNCC Freedom Singers, founding member of the Atlanta-based Harambee Singers, and founding member of Sweet Honey in the Rock. She received the Presidential Medal for the Humanities in 1995 and the MacArthur Fellowship in 1989.

*Reprinted with permission of the author from page 168 of We Who Believe in Freedom: Sweet Honey In the Rock… Still On The Journey by Dr. Bernice Johnson Reagon and Sweet Honey in the Rock. New York: Doubleday, 1993.