The Adams Morgan Organization and Black Power in D.C. (1972 – Present) By Marie Nahikian 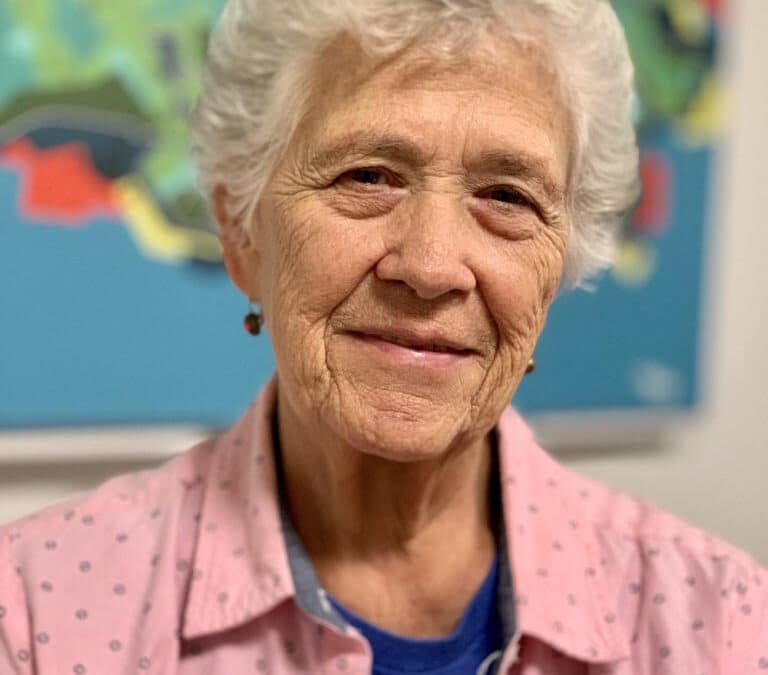 The Adams Morgan Organization (AMO) and its leadership had a role in Black Power in the District of Columbia along many paths. Each path seems more important than the next.

AMO was created in 1972, after residents spent almost a full year developing a governing structure that recognized the neighborhood’s economic and racial diversity: about 1/3 African-American, Latino, and white. AMO grew, in part, out of three community organizing projects: a) the successful 1968-1969 struggle for community control of Adams and Morgan schools, b) an unsuccessful urban renewal planning effort, and c) the Pilot District Project (PDP) to confront police harassment of young blacks. Led by Marion Barry and Stephen Klein, PDP was likely D.C.’s earliest effort to protest policing in Black neighborhoods. Adams Morgan’s racial diversity made it painfully obvious that it was black youth who were “being policed.” 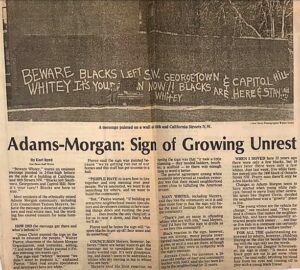 Community meetings were held at the Potter’s House on Columbia Road, NW. The first meeting to discuss what became AMO was called by three community residents: Topper Carew, founder of the New Thing Art & Architecture Center; Stephen Klein, keeper of the flame left from the Adams and Morgan schools initiative; and Carlos Rosario, anointed leader of the growing Latino community. Topper Carew provided particularly powerful credibility both within and outside the community. The AMO slogan—“Unity in Diversity”—was selected at the first meeting of the AMO Assembly and placed on the Adams Morgan Flag, which flew at a kiosk that still stands at 18th Street and Columbia Road, N.W. The first flag was made by my mother, Irma Nahikian.

The charter created a participatory structure with power first vested in well-attended meetings of the Assembly, where residents debated and voted on issues, set priorities, and elected the Chairperson. (In a significant link to D.C. Black Power, this diverse neighborhood elected two African-Americans to be AMO chairpersons: Walter Pierce, the founding Chairperson; and Frank Smith, who was subsequently elected to the D.C. School Board and City Council.) The Assembly could charter committees to work on specific projects, issues, and concerns from other community organizations. For example, if a block association wanted better lighting, it could seek the support of the whole Adams Morgan community by making its request to the Assembly. In a separate annual election, single member district representatives were selected to serve on an Executive Council to carry out the work. 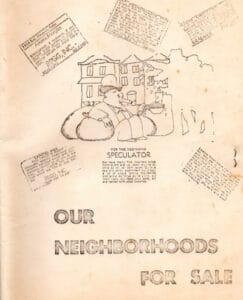 I was the “almost” full-time volunteer community organizer for AMO. My full-time job at the Institute for Policy Studies (IPS) would not grant me more time to work on AMO and suggested that local community organizing was not a priority. So I left IPS and in 1972, when AMO opened a storefront office at 2431 18th Street, N.W., I was hired as AMO’s only paid staff, making $75.00 a week until 1975.

The Adams Morgan Organization (AMO) is a window to what Black-elected government in the District of Columbia might do to make people’s lives better. AMO set the stage for what is possible when diverse people act together.

One of AMO’s most successful efforts was the campaign to get the U.S. Congress to appropriate $250,000 in the District of Columbia budget to purchase the vacant land that had been Community Park West for many years. The vacant land included a community garden, playing fields, and burial grounds. The land was offered for sale for expensive housing. The lobbying effort in Congress was unique. We took Black Adams Morgan youth dressed in sports uniforms through the halls of Congress, pulling a large square television set mounted on a rolling dolly that presented a home movie of the park to anyone who would stop to watch. It worked. Funds were appropriated in 1978. Today the park is named Walter Pierce Park in honor of its founder and AMO’s first elected Chairperson.

Recent efforts have documented that the park site is steeped in history. It was the site of Washington’s only Quaker burial ground, founded in 1807. From 1823 to 1870, the park site was owned by John Quincy Adams and his heirs as part of their mill property along Rock Creek. During the Civil War, it was the site of Cliffburne Hospital and the headquarters for the Veterans Reserve Corps. From 1870 to 1890, it was Mt. Pleasant Plains Cemetery, a multi-denominational African American cemetery where at least 8,428 people were buried. In 2005, community activists stopped a major earth-moving project at the park because of its history as an African American and Quaker burial ground. A grassroots coalition of concerned community members, the descendants of the buried, and Howard University archaeologists worked to document and protect any unmarked graves that remained (see https://walterpierceparkcemeteries.org/).

AMO was D.C.’s first community organization to oppose redlining. AMO also successfully opposed police harassment, and the construction of a BP gas station at 18th Street and Columbia Road, N.W., and it was the plaintiff in several groundbreaking challenges including the FCC challenge to monopoly control of media ownership in 1974.

When the Home Rule Charter for the District of Columbia was passed by the U.S. Congress in 1973, AMO was cited as a model for the elected Advisory Neighborhood Commissions that are active today.

Housing, real estate speculation, and residential displacement (not gentrification, as it is called today) was an early and urgent issue. Notwithstanding the growing Latino presence, the persons most impacted were African American families. At almost every meeting of the AMO Executive Council, there was discussion of black families on Willard Street, Swann Street, and Seaton Place being pushed from their long-term housing. One of the earliest rallies and demonstrations against displacement was on Willard Street with RAP, Inc. and AMO Executive Council members Isaac and Ruth Long, who lived in the 1700 block of Swann Street.

I remember my first experience with a family being evicted. The McCoy family lived in a two-bedroom apartment above the Ben Franklin dime store on 18th Street, N.W. The children were usually camped out in the AMO office almost every day. Mrs. McCoy never mentioned that her landlord had told her to leave; one afternoon, the children just never showed up. The next day, I went to their apartment only to find it mostly empty with an eviction notice on the door.

In 1974, eviction notices were mailed to 27 families in the 1700 Block of Seaton Street, N.W. This was the sign that there were going to be wholesale evictions. It felt like war had been declared. There were many AMO members on the block; I was Seaton Street’s first organizer, and Lavinia Harvey was the block leader. I rapidly worked to organize resources, particularly the legal help from Johnny Barnes at the Georgetown Legal Clinic. We knew the Tenant Right to Purchase clause of the rent control law had been violated, but how it would be resolved was unclear.

Court appearances were huge: 27 families filed into court with a host of attorneys representing former landlords and the developer, D. C. Pope, who had planned to purchase Seaton Street. Johnny Barnes, a young African-American, was the first attorney; later, we successfully added pro bono law firms, including Arnold and Porter. Both Johnny and I were the subject of multi-million dollar lawsuits filed by the developer and the owner, D.C. Pope. Johnny Barnes recently recalled that he spent 72 consecutive Saturdays with families on Seaton Street.  After multiple hearings, Judge James A. Belson set the issue for trial but directed, “You all better go out and settle this, or you will end up in the Supreme Court.” We settled, winning the right to purchase the homes for under $20,000 each. AMO had suddenly become a housing developer, raising money to assist with down payments.

AMO emerged as the first community organization in the nation to identify the impact and threat of real estate speculation and the displacement of black residents. Of significance, AMO filed the first challenge under the Community Reinvestment Act about the redlining practices of Perpetual Savings & Loan, which was seeking to locate at 18th Street and Columbia Road, N.W. We settled this case, too; Perpetual provided purchase mortgages, and the city provided rehab funds and permanent mortgages from community development funds.

AMO led what became a citywide organizing effort resulting in a sweeping set of policies, regulatory infrastructure, and housing programs that included financing as well as technical and legal assistance. A partnership between AMO and Friendship House on Capitol Hill, which organized the Capital East Housing Coalition (led by Gilda Warnick, an African-American social worker) resulted in the formation of the D.C. Tenant Congress and the Citywide Housing Coalition. This organizing led to legislation that would have never been passed into law but for the existence of Black Power vested in D.C.’s new home rule government. Members of the first home-rule-chartered City Council—Marion Barry, John A. Wilson, Nadine Winter, and David Clarke—implemented a strategy to mitigate the growing displacement of D.C. residents. (As of 2018, each of these leaders are gone.)

There has never been a comprehensive legislative effort anywhere in the U.S. close to the regulatory framework of rent control (1971), condominium and cooperative conversion limits (1976), and the tenant right to purchase law (1972 and 1976), which offered renters an opportunity to purchase their homes when landlords wanted to sell the property. These regulations, implemented from 1971–1977 along with the real estate transfer tax, aka speculator’s tax, which provided a housing funding stream, changed the real estate landscape in D.C. and slowed the displacement that was occurring in many neighborhoods.

In 1979, I moved from community organizer to be a Special Assistant for Rental Housing to Mayor Barry and subsequently moved to the D.C. Department of Housing & Community Development to help create the Tenant Purchase Assistance Program. It is not a small thing that what began with AMO’s leadership on displacement and real estate speculation culminated during Mayor Marion Barry’s first term. The Tenant Purchase Assistance Program successfully moved 3000 units of rental housing to predominantly minority ownership in the District of Columbia. It is likely that many more rental units would have been converted to ownership, but the Federal Wage and Price controls put in place under President Richard Nixon were allowed to expire, shoving mortgage interest rates to over 20 percent.

What survives today are strong eviction controls and tenant purchase rights for multi-family buildings. In 2017, the D.C. City Council ended the Tenant Opportunity to Purchase Act for single-family homes. This represents a systematic dismantling of the regulations created and implemented during D.C.’s first home-rule “Black Power” government. The struggle to create opportunities for housing for a large number of D.C. residents could disappear completely. In March 2019, the Washington Post reported District of Columbia is considered to have the highest intensity of gentrification and displacement of minority residents in the U.S.

Marie Nahikian is a community organizer who specializes in housing advocacy and was one of the founders of the Adams Morgan Organization.