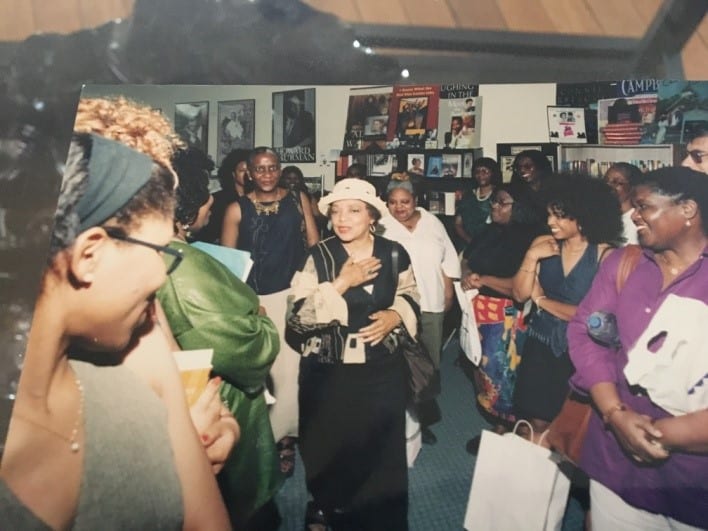 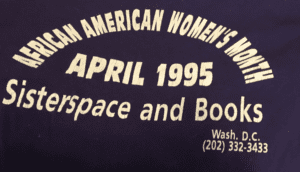 As a result of discussions held at Cassandra’s Consignment Boutique, another African-American woman-owned business also located on U Street, Faye Williams established Sisterspace in November 1994 with the intention of providing a safe space and place. The weekly, sometimes daily events included lectures, workshops, book signings, and debates held by a cadre of scholars, activists, and organizers (young and seasoned) from all over the country.

Rich exchanges between authors and the community were epic. Sisterspace was fortified by the authors who came to the store: Maya Angelou, Toni Morrison, Octavia Butler, Liani Mataka, Jeff Majors, Tananarive Due, Vernice Berry, Nikki Giovanni, Kwame Alexander, Bebe Moore Campbell, E. Lynn Harris, Paul Coates, Al Sharpton, Renita Weems, J. California Cooper, Lisa Moore, Ruby Dee, Walter Mosley, Queen Latifah, Charles Ogletree, Jr., Eloise Greenfield, Franco, Patti Labelle, and many, many more. Each event grew into a commentary on the ways and means of sustaining commitment to the community.
Sisterspace and Books sponsored the first African-American Women’s Writers’ Conference, held at the University of the District of Columbia in April 1997. Over 200 women participated in the conference, where they attended workshops and lectures by Angela Davis, Sonia Sanchez, Julianne Malveaux, Octavia Butler, Paule Marshall, Randi Kristensen, r. erica doyle, and others. Some of those in attendance ended up having their works published.

The decision to locate Sisterspace and Books (and the Consignment Boutique) on the U Street corridor was a conscious one by the owners to do their part in revitalizing D.C.’s famous Main Street for Black Washingtonians. The place to get hair done or go to the doctor or dentist. The place to shop if they wanted to support proprietors who looked like them. Not far from such institutions as the Lincoln Theatre, the Pride Building, the Anthony Bowen YMCA, and the True Reformer Building, the bookstore was where people went to connect. The consignment store gave way to the bookstore, which moved from the 1300 block of U Street to 1515 U Street in 1997. Then the flurry of high-priced residential and commercial construction started, and the corridor’s rebirth began to vault from bohemian to upscale. The street that for so many decades was a refuge for Black people became an increasingly uncomfortable place to be.

In 2004, after a five-year battle with the 1515 U Street landlords over gentrification, the store closed.

Cassandra Burton is a business owner, living in Washington,

D.C. since the mid-50s. She helped establish Sisterspace and Books in 1994, serving as its manager and custodian until it closed in 2004. She co-founded, along with 40 other Black women, the African American Women’s Resource Center, a non-profit organization that provided services, developed programs, and advocated for women and girls of the African Diaspora and their communities for 25 years.