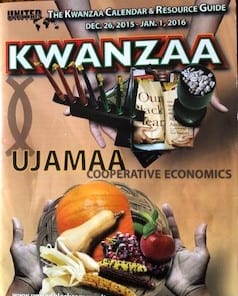 Kwanzaa is a holiday based on the African tradition of celebrating the first fruits of the harvest. This holiday was tailor-made for the Black Power Movement by Dr. Maulana Karenga and introduced to the Black community in 1966. Even though it took several years to be embraced by large segments of the Black community, it has proven to be the most successful attempt ever made at creating a uniquely Black holiday. It has gone on to be practiced by many Black people throughout America and in the rest of the world.

Kwanzaa’s success was largely due to the fact that it came along when Black people were beginning to take seriously the ideas that 1) we must begin to control our own destiny and 2) we needed Black Power in terms of how we are treated and how we treat each other. At that point, we began to embrace approaches to struggle that could obtain real power based on our own reference points and criteria.

Kwanzaa’s founder presented it to Black people as a cultural holiday rather than a religious one. This fact is important because it makes the celebration available to all Black people without regard to their religious preferences.

The essence of Kwanzaa can be found in its seven principles called the Nguzo Saba. They are a set of guiding ideas that, if internalized, can speak to our collective need to live on our own terms. Although these values are to be practiced as much as possible throughout one’s lifetime, Kwanzaa is designed to emphasize them during the weeklong celebration. They are highlighted one at a time, for each day of Kwanzaa:

All of these principles emphasize collective, community-based action and behavior rather than individual, self-centered ways of conducting oneself. This is based on Kwanzaa’s not-so-apparent attempt to show the primary difference between an African world view and a European world view, the communal way that Africans have structured their societies versus the individualistic focus that is most common among European societies. It promotes the idea that we should be trying to be ourselves and not simply trying to copy others, that being a Black person living a Black life is being for each other, not simply yourself.

Practicing Kwanzaa requires the daily ritual of lighting one of seven candles and having young people tell us what that day’s principle means to them. This can be done in several settings: with the family, among friends, or in a large community setting.

In most large metropolitan settings, communities of individuals who share a Pan-African outlook form a committee to organize at least one principal community event that most people who practice Kwanzaa are encouraged to attend. Quite often, this event is held on the first day of Kwanzaa but can take place on any of the seven days. The remaining days are practiced in people’s homes or by individual organizations and groups for their membership.

The first public celebration of Kwanzaa in the District of Columbia probably happened in 1968; where and exactly when cannot be firmly established. (It is not known how many families in D.C. practiced Kwanzaa in their homes or in other private settings prior to 1968.)

At least two well-known individuals in the D.C. Pan-African community claim to have hosted the first public celebration of Kwanzaa in D.C. There is Brother Melvin Deal, a well-respected cultural leader who established and ran the African Heritage Dancers and Drummers, the first and longest lasting community-based African dance troupe in the city. The second contender is another outstanding long-time member in the Pan-African community, Mama Nia Kuumba. There is no way at this point to determine whose claim is more accurate, even though I personally attended Mama Nia’s Kwanzaa event in 1968.

The Most Important Contributors to Kwanzaa’s Success in D.C.

Since 1968, Kwanzaa has been growing steadily in the D.C. area, due in part to the various groups that have been organizing and promoting Kwanzaa activities around the city. The most important of these groups, the United Black Community (UBC), began organizing and promoting Kwanzaa activities in 1977 and still carries on that function today. UBC’s original purpose was to establish an effective working coalition among the Pan-African organizations, and from the start, it saw Kwanzaa as a way to accomplish that goal.

The central means that UBC uses to accomplish its Kwanzaa-related mission is the publication and distribution of its yearly Kwanzaa Calendar and Resource Guide. This high-quality publication is considered by many to be the best currently being published anywhere. It is compiled, printed, and distributed without any government, white business, foundation, or other support outside the Black community. Approximately 6,000 copies are given out free every year.

UBC’s calendar and resource guide contains most of the public Kwanzaa events in the city and the surrounding communities as well as listings of most of the Afrocentric businesses in the community and major events that many of the most important Pan-African organizations will hold during the upcoming year. It features an editorial that offers encouragement as well as advice about Pan-African-related matters. In addition, it provides a pictorial listing of most of the Black community advocates and freedom fighters in the D.C. community and elsewhere that have become ancestors during the previous year. It also provides, through its ads, a marketplace for most of the pro-Black businesses in the area.

In addition to UBC, another formation deserves to be recognized for their important contribution to the evolving popularity of Kwanzaa in the D.C. community: Black Star Enterprises. It published a high-quality, community-wide Kwanzaa guide for several years beginning in the 1980’s up to about 2006. This group was led by three key members of the Pan-African community:

Their efforts helped bring Kwanzaa to the powerful level it has currently reached in this community.

In addition to the Pan-African community, several churches have celebrated Kwanzaa on a regular basis. Prominent among them is the Union Temple Baptist Church in Southeast Washington, D.C., under the leadership of Rev. Willie Wilson and one of its departed founding members, Mr. Money Hilton. Later, the Imani Temple, a breakaway Catholic congregation under the leadership of Father George A. Stallings, became a strong practitioner and supporter of Kwanzaa in D.C. Other churches such as Metropolitan AME, People’s Congregational, and Lincoln Temple have held Kwanzaa events and/or supported and encouraged their members to practice Kwanzaa in their homes.

Even though many churches in the Black community supported and practiced Kwanzaa, others were opposed to it or simply remained uninvolved. Some of them say Kwanzaa is a challenge to Christmas rather than a complement.

Other organizations contributed to the local success of Kwanzaa by holding pre-Kwanzaa and Kwanzaa events and programs for their members or employees. One important example was the community youth clean-up and employment organization called Pride, Inc. This organization was founded by Marion Barry, Mary Treadwell, and Mr. Carroll Harvey. They published a line of Kwanzaa greeting cards designed by the legendary Black D.C. artist Kofi Tyus, who later went on to produce a very prestigious line of Black greeting cards that was sold around the world. That line included Kwanzaa cards, which helped to spark a wave of other Kwanzaa cards throughout the U.S.

Several musicians and filmmakers have developed creative products that have been used increasingly to bolster Kwanzaa in D.C. They include a video on how to practice Kwanzaa put out by UBC and sister Ayo Handy-Kendi as well as a film out of Philadelphia, Pa., called “The Black Candle.” Afi Soul, Ayanna Gregory, and others have developed and recorded Kwanzaa songs.

Two outstanding annual holiday marketplace efforts have also set a positive tone about Kwanzaa among the Black masses in D.C. Even though they are not held exclusively for Kwanzaa, many of the items for sale are African-inspired and Kwanzaa-related. The first was established by the African-American Holiday Association, led by sister Ayo Handy-Kendi. The second, BZB International, was developed by sister Juanita Britton. It is still helping our community celebrate our African roots through Kwanzaa by making the items we need to do it right available to us prior to the holiday each year.

Even though Kwanzaa remains essentially the same as when it was created by Dr. Karenga in 1966, the D.C. Pan-African community has made several additions and supplements to its celebration.

There are several public events each day; on the first and last days, large public gatherings are organized by bodies that represent the entire Pan-African community. Currently, the coalition called the Leadership Council for Pan-African Nationalism (LCPAN) is responsible for the first day, Umoja (unity). This means that the citywide celebration of Kwanzaa’s first and probably most important day is sponsored by the formation in our community that best represents unity. This is the celebration that people are most encouraged to attend. Imani (faith), the last day of Kwanzaa, has been given over to the D.C. Council of Elders (COE), which follows the tradition of having an important role for elders in African societies all over the continent.

The other days have become associated with several key organizations in the Pan-African community. This includes the UNIA organization on Nia (purpose) night, the Ausar-Auset Society on Kujichagulia (self-determination) night, and Ujamaa School on Ujamaa (cooperative economics) night. A collection of graduates from independent African-centered schools come together each year to put on a program on Ujima (collective work and responsibility) night.

In the beginning of the D.C. community-wide approach to celebrating Kwanzaa, the first day was celebrated by focusing on our youth, featuring a joint program put on by our independent African-centered schools. This approach lasted throughout the 80’s and 90’s until the schools seemed unable to maintain that level of cooperation. A new approach was adopted around the year 2000, leading to LCPAN’s responsibility for that day.

A related D.C. innovation that did not work out well was the introduction of competition between the schools. Sometime around 1985, UBC organized a competition between the independent schools centered on Black history and Black-related current events and geography. In this competition, each school sent a team of students to represent their institution, and the team that answered the most questions correctly won. The winning school got to keep the award for that year, and its name was affixed at the bottom of the award. This competition proved much too contentious when the same school won the honor several years in a row. This resulted in a lack of participation from many of the other schools, forcing this event to be stopped.

Several other important additions have been institutionalized in D.C. by the UBC Kwanzaa planning committee. They include:

Kwanzaa remains one of the most enduring legacies of one of the most important periods in recent Black history: the 1960’s, sometimes called the Black Power decade. It is an important milestone in Black cultural and historical development that has been accepted by many, if not most, Black people as a very important cultural holiday that focuses on our people’s emotional needs. The degree to which the Washington, D.C. Black community has embraced and enhanced Kwanzaa’s development has served many valuable purposes in the Black community, which include the efforts of African-American people to obtain more power.

Baba Lumumba was the co-founder and director of the New School of Afro-American Thought. He also co-founded the first Black Panther Party in California, edited SOULBOOK, and served on the board of directors of Drum and Spear Bookstore.