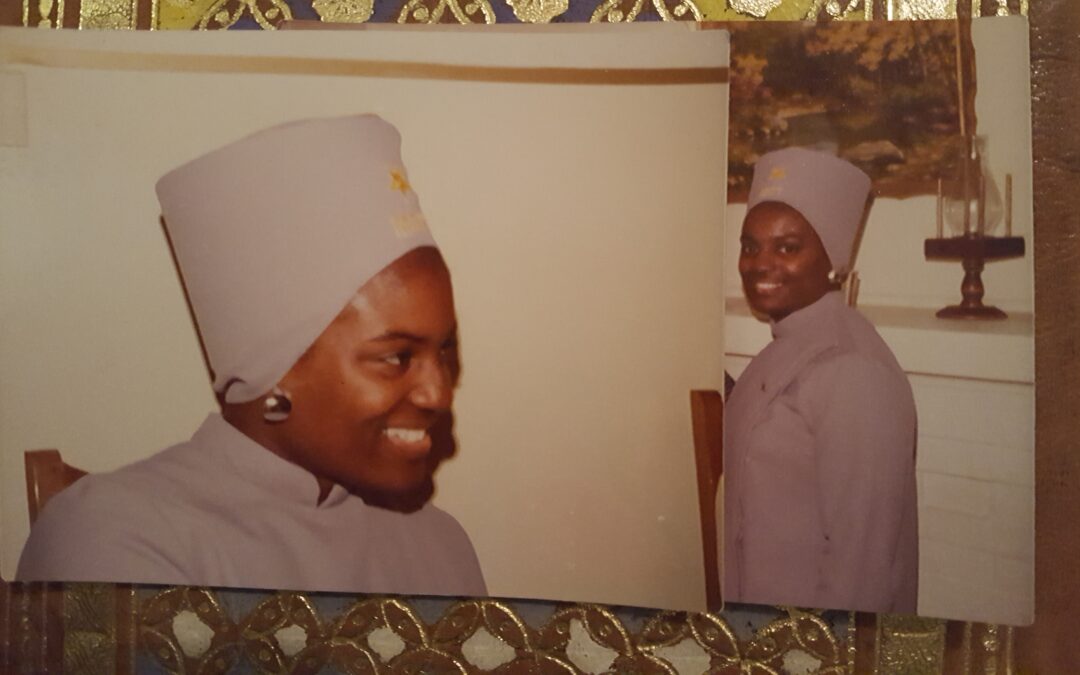 All photos courtesy of Marcia Ellis

Muhammad’s Mosque No. 4 was legally incorporated in 1959; only Detroit, Chicago, and Milwaukee had preceded Washington in developing a unified Muslim community. In 1960 following intense fundraising, the building on New Jersey Avenue, N.W., was established, becoming the first “Masjid” structure to be built from the ground up. The Honorable Elijah Muhammad came to D.C. to dedicate the building in 1960.

In the summer of 1971, I stepped into Mosque No. 4 at 1519 4th Street, N.W., ready to seriously consider becoming a member of the Nation of Islam. A former love interest strongly encouraged me to visit the Mosque after he converted in prison. I had witnessed his own positive transformation and felt compelled to see firsthand the source of his renewal. I knew of the Nation from The Autobiography of Malcolm X, and like many, I had to reconcile my growing interest with Malcolm’s death. The times were desperate in our community, and I decided to join what appeared to be a resurgence in the Nation’s membership. I was a part of a new wave of converts; sisters I met were coming into the Nation from other movements that I had also considered, e.g., the Black Panther Party and SNCC.

I was overwhelmed by what I experienced and observed that first visit: the seriousness with which everyone moved, the precision, the order, the seeming clarity of a common purpose, and the warmth I felt on top of all that immediately drew me in. I was ushered to the women’s side where I went through the normal security check, including a body pat-down. Everyone was in uniform and carried out their duties with an admirable expertise. Once in the sanctuary upstairs, I continued to be awestruck as I was seated on the sisters’ side of the auditorium but very conscious of the Fruit of Islam (FOI) and men on the other side. Brother Minister Lonnie Shabazz’s teachings resonated with me as I joined the call and response of the congregants. I was impressed with the changing of the guard ritual of the FOI guarding the podium.

I would visit the mosque many times after that day, and though I began the formal process of becoming a member of the Nation of Islam, I did not make the final commitment for several months. Events at home drove me to Boston, where I lived with friends. I was also feeling pressured by the brother in prison to commit and felt the distance from him would be best so that I could decide if I was succumbing to his pressure or following my own soul and spirit. Yet I found myself seeking out the mosque in Boston, and after a few months, I decided to return to the D.C. area and make the commitment to join the Nation. I completed the formal process, which involved corresponding with the Nation headquarters in Chicago and following the steps required to be accepted into the Nation. When I received my letter from the Honorable Elijah Muhammad, I was elated! The Minister introduced me and all new members to the congregation. I became Marcia 2X, and took part in what the Nation described as the “second greatest class of the Universe, the MGTGCC, the Muslim Girls Training and General Civilization Class.” (The first class was the FOI for the brothers).

For the next several years, I became immersed in the Nation of Islam, while maintaining a close relationship with my biological family. I moved to an apartment at 9th and L Streets, N.W., where other Muslims would also be welcomed as tenants. I became a part of the Vanguards, an elite force of young, single sisters in the army of the NOI, committed to be model sisters and a security force trained in precision drilling and militaristic maneuvers. Our leader was a tough, young sister named Alicia who had grown up in the Nation, someone we feared, admired, and respected. I was quickly promoted to a Lieutenant and my Commander was the most formidable and firm, Sister Captain Margaret. I also team-taught second graders at the University of Islam—boys in the morning and girls in the afternoon—and volunteered at the Shabazz Bakery. I felt honored to be asked to join the Minister and his wife each month in serving the new converts invited to their modest home in Northeast.

I met and became close to many sisters; some of those friendships continue to this day.  Together, we lived a life of clear purpose, enjoying our unity as strong and powerful women, prepared to die for the Nation we were building. We fasted together often, and when we ate, we either cooked together or ate at the Shabazz Restaurant on 14th Street, N.W. We supported one another in courtships, marriages, and motherhood. We travelled together to events at other Mosques and shone in our precision drilling demonstrations and competitions. We worked with the Junior Vanguards and helped to nurture and support their growth as future leaders in the Nation. We looked up to the senior sisters at the Mosque, several of whom were among the original followers of the Honorable Elijah Muhammad. It was a fulfilling way of life, though not without its contradictions.

On February 25, 1975, a group of us headed to Chicago by road during a snowstorm to attend the annual Savior’s Day, which was to take place on February 26. It was our pilgrimage. On the way, we got the news that the Honorable Elijah Muhammad had died. We knew that he had been sick but didn’t expect the news at that time. I was among the thousands who gathered that Savior’s Day to be a part of the funeral for the Messenger and witness the announcement that the new leader would be the Messenger’s son, Wallace Muhammad (later known as Warith Deen Muhammad). Minister Louis Farrakhan was visibly emotional during the funeral. That night following the funeral, while I was at the Shabazz Restaurant in Chicago, Minister Farrakhan and his wife came in and greeted the patrons.

After that time, things began to change quickly and drastically in the Nation and at the Mosque here in D.C. It was a period of upheaval for many, including me. I married a brother during the time of transition. It was a brief marriage, but a beautiful baby girl came out of it. It was at that time that I decided to step back and consider the immediate future, baby and enduring friendships in tow. Those years in the Nation of Islam were defining ones for me as a woman. I learned about my power to commit, sacrifice, and be disciplined in order to build something greater than myself—a Nation, or at least a strong community.

Marcia V. Ellis is a health and wellness advocate, including HIV. She currently is the community coordinator for the GWU Center for AIDS Research and serves as the coordinator for their Community Advisory Board. Prior to that, she retired from a long career in international development with a focus on education primarily in the Africa region.